For nearly one week now, violent riots have taken place every night and in different cities across America. These demonstrations typically begin in peaceful manners, only to later dissolve into chaos and violence.

As folks across the states mourn the death of George Floyd, everyone is being reminded that rioting, looting, and burning down America are not the ways to effectuate change. With that in mind, one of the groups behind the mayhem, arson, violence, and looting on U.S. streets is none other than AntiFa. 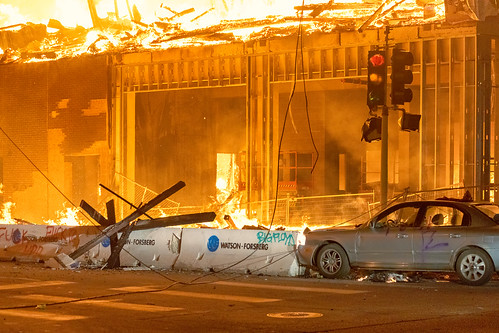 AntiFa, a group that ironically stands for “anti-fascism” while engaging in fascist tactics, is finally getting their just due. On Sunday, President Trump announced that the United States government is officially declaring AntiFa as a terrorist organization.

On Sunday, Barr explained that AntiFa bears responsibility for many of the organized, violent, and dangerous riots that have broken out in America over the past several days.

The attorney general also informed the nation that AntiFa is a domestic terrorist organization and shall consequently be treated as such. Barr’s remarks arrived as many cities across the country issued curfews to prevent additional riots from happening on Sunday night.

Attorney General Barr’s statement on rioting, the role of the Department of Justice, and Antifa.

“The violence instigated and carried out by Antifa and other similar groups in connection with the rioting is domestic terrorism and will be treated accordingly.” pic.twitter.com/6aKElRYZdR

A critical part of Barr’s statement involved noting the difference between violent riots versus peaceful protests happening in response to George Floyd’s death. In so doing, the attorney general urged states to call in the National Guard when necessary while remarking the importance of a healthy relationship between police and civilian communities.

The United States of America will be designating ANTIFA as a Terrorist Organization.

Are you glad that AntiFa is finally being declared and treated as a domestic terrorist organization? What did you make of the statement from U.S. Attorney General William Barr? Let us know your thoughts in the comments section below!