For the past week now, unspeakable carnage has broken out on the streets of the United States of America.

Rioters who call themselves protesting the death of George Floyd have set buildings and cars ablaze while looting, beating innocent people in the streets, and wreaking havoc. State and local leaders who called themselves trying to calm things down subsequently issued curfews, but many rioters aren’t abiding by them. 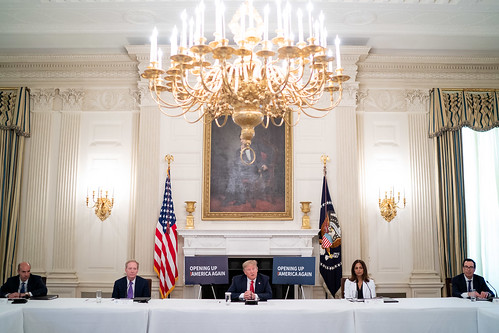 Suffice it to say, the destruction of cities in the United States cannot go on. Just about everyone in America agrees that Floyd’s death was a tragedy; however, it does not entitle rioters to destroy businesses, monuments, or anything else for that matter.

This is why President Trump issued an important address to Americans on Monday; this address pertained to the death of Floyd, along with subsequent actions to stop rioters from burning this country down, confirms sources.

Everything to Know About President Trump’s Statement to the Nation

The president did not mince words when speaking at the White House. Firstly, Trump kicked things off by affirming his duty to upholding law and order while protecting Americans. During the time of the president’s address, Secret Service and law enforcement officers were forced to contend with demonstrators outside of the White House.

"My first and highest duty as President is to defend our great country and the American people." pic.twitter.com/V70hAt4WLU

Trump also made clear that he’s working with governors and mayors to cease the violence happening in parts of the country. With this update came the warning that if state and local officials fail to do their jobs and get the National Guard to stop the carnage, Trump will send in the U.S. military to “quickly solve the problem.”

"These are not acts of peaceful protest. These are acts of domestic terror." pic.twitter.com/ht7uLFgJRx

Finally, the president explained that the actions of many rioters go far beyond a peaceful protest. Some examples include the beating of a Dallas man, the murder of a black California police officer, and an assault against a New York woman.

What did you think about Trump’s address to the nation on Monday? Do you believe the military will need to be called in to stop the arson and violence on American streets? Sound off with your thoughts in the comments section below!