As the stakes get higher in the 2020 presidential election, President Trump is letting the American people know that he’s fighting on our behalf.

Several polls have begun to shift in the president’s favor, notably in battleground states like Florida. As Trump continues to campaign, Biden seems to be retreating back to his basement; on Tuesday, reports spread of the former vice president’s notable absence from the public eye. 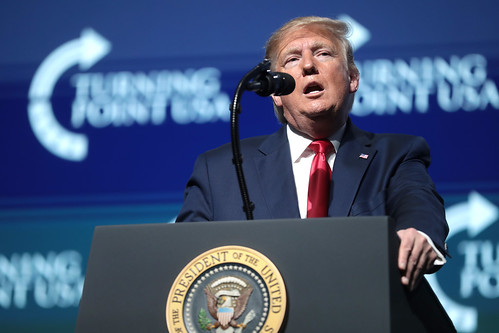 Yesterday, President Trump traveled to Jupiter, Florida in order to continue campaigning for a second term in the White House.

Prior to his departure from the White House, however, Trump confirmed that he’s willing to spend his own money on running for re-election, if that’s what it takes to win, per Breitbart News.

Trump on Self-Funding His 2020 Presidential Campaign

During talks with the press, Trump explained that although his re-election campaign is “doing very well,” he’d still be willing to self-fund the campaign if doing so became necessary.

Talk about the 45th president potentially self-funding his presidential campaign arrived after the New York Times published a piece claiming that the Trump campaign spent considerable amounts of money. This would be far from the first occasion of the Times intentionally posting misleading information about the president.

The Truth About the Trump Campaign’s Spending

The president’s political adversaries are eager to promote the false narrative of the Trump campaign going broke.

Of course, this narrative is simply not factual. Trump explained that his campaign has spent more money in recent months due to “disinformation campaigns” from the Democrats, especially pertaining to COVID-19.

However, both Trump’s campaign and the RNC raked in millions of dollars during the week of the GOP National Convention; moreover, enthusiasm for the president and his campaign remains at an all-time high. Just yesterday, Florida residents met the president with supportive parades upon his arrival to, and later departure from, Jupiter.

While the president is more than willing to self-fund his re-election campaign if necessary, there’s no supporting evidence to confirm that the campaign is low on funds.

As the leftist media attempts to spread falsehoods about the Trump campaign, they are notably silent about Biden’s disappearance from the public. While the former vice president remains in hiding, President Trump has several additional campaign stops that he will make this week.

What do you think about President Trump’s willingness to self-fund his re-election campaign if the need to do so presents itself? Share your thoughts with us in the comments section below!