Trump Calls for An End to Police Chokeholds

As the radical left calls to defund law enforcement, the rest of America is seeking reasonable solutions to improve relationships between officers and civilians.

Despite what left-wingers want us all to believe, systemic racism is not an issue among police. Law enforcement officers don’t wake up, put their lives at risk, and take on all that comes with being a policeperson just to play out some racist, twisted fantasies. 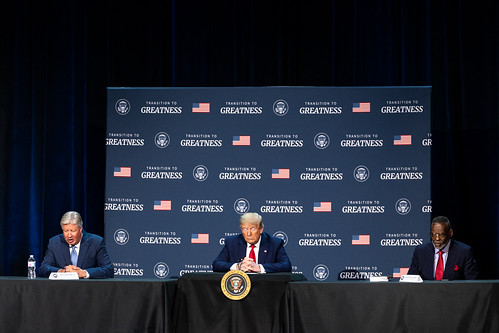 While the radical left calls to defund the police, they should be careful what they wish for. Many of the communities screaming loudest to abolish law enforcement are in greatest need of police presence.

Despite the noise coming from the radical left, President Trump presented an alternative step towards bettering civilians’ trust in law enforcement. On Friday, the president suggested ending the use of police chokeholds, confirms sources.

Reviewing Trump’s Statements on Police and the Use of Chokeholds

The president’s suggestion about ending chokeholds arrived during an interview with Fox News. Yesterday, Trump stated that although this method of force can often be used for subduing “very bad people,” he personally doesn’t care for chokeholds. Shortly thereafter, the president noted that law enforcement officers are often put in very “tough [positions].”

Before suggesting that chokeholds should come to an end “generally speaking,” Trump criticized the officer who knelt on George Floyd’s neck for nine minutes. The 45th president questioned the need to use abundant amounts of force when more than one officer is present to subdue an individual.

Trump’s remarks about ending the use of police chokeholds arrive as he also maintains that America will not defund the police. Unfortunately, leftist mayors across the nation are still more interested in reducing funding to police departments; they’d rather abolish the police than better the relationship between law enforcement and civilians.

Do you agree with President Trump? Should the use of chokeholds be no longer used by police officers? Let us know in the comments section below!