Yesterday, the GOP held the second night of the Republican National Convention.

Tuesday night’s theme focused on the “Land of Opportunity” with various speakers addressing the nation. During remarks, conservatives talked about what it means to live in the United States. Speakers explained that being an American citizen is something that one should value and cherish. 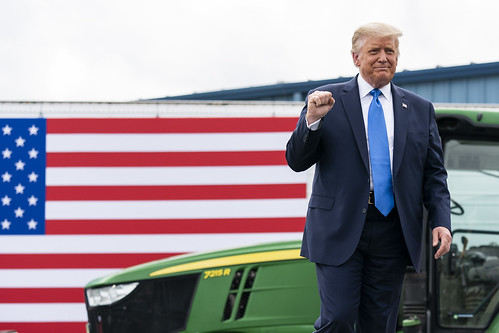 In between speeches, Americans even got to see a naturalization ceremony of legal immigrants with remarks from President Trump and Department of Homeland Security (DHS) Secretary Chad Wolf.

In speaking about the Land of Opportunity, conservatives also sent a message to the rioters who have chosen to wreak destruction across the nation. Some of the most direct points arrived from First Lady Melania Trump, confirms Breitbart News.

The Message from the First Lady

During Trump’s remarks, she talked about the power of the American Dream and her thankfulness to have experienced. Not long afterwards, the first lady then addressed individuals who are choosing to riot and loot various communities across the country.

Trump urged looters and rioters to civilly “come together” in order for Americans to collectively live up to shared, admirable values. Likewise, the first lady reminded listeners to look at various issues from more than one perspective.

One of the most notable parts of the first lady’s speech arrived when she stated that she wouldn’t go after the Democrat Party or its members. Instead, Trump proclaimed that such rhetoric only deepens divides across the nation; the first lady also reminded Americans of the various ways in which her husband seeks to unite the nation.

Trump noted that her husband doesn’t “play politics,” but instead focuses on keeping Americans safe, allowing Americans to succeed, and ensuring that the nation thrives.

The Timing of the Address

The first lady’s appeal for rioters to cease violent and destructive acts against communities has impeccable timing. Thus far, two riots in a row have broken out in Kenosha, Wisconsin after the police shooting of Jacob Blake, a black man.

Blake faces charges of domestic violence and sexual assault; furthermore, in the moments leading up to the shooting from police, Blake failed to comply with officers and even exchanged blows with them.

Black Lives Matter and other leftist activists, however, continue to paint Blake as a hero.

What did you think about First Lady Melania Trump’s speech last night? Be sure to let us know down below in the comments section.