Seattle, Washington is in big trouble.

Riots, violent outbreaks, and other forms of dangerous social unrest continue to break out on the city’s streets. Despite the claims from certain liberal pundits, these displays are not about equality or justice. As many federal officials already pointed out, violence and destruction are about anarchists and others seeking to do harm. 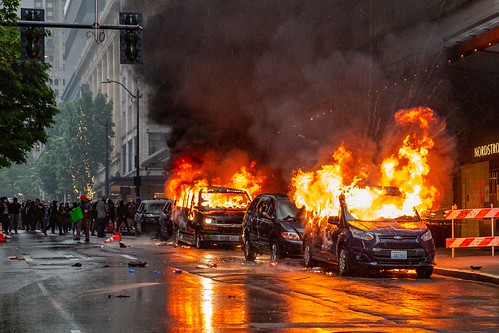 Due to the levels of chaos and violence happening in various cities, like Seattle, President Trump has chosen to send in federal troops to get matters under control.

However, Seattle Mayor Jenny Durkan (D) maintains that the presence of federal troops, rather than the violence that prompted their presence, is a problem, reports Breitbart News.

A Closer Review of Leadership in Seattle

In many regards, Seattle’s leadership mirrors the leadership in cities like Chicago, Portland, etc. Each of these localities is run by Democrats; furthermore, each of the Democrat mayors in the aforementioned cities have censured federal officials for entering the areas to end violence.

Seattle’s Durkan took things a step further earlier this week, however; per the Seattle mayor, the president’s decision to send federal law enforcement into cities plagued by violence is akin to “martial law.” Durkan made this claim during an interview with National Public Radio.

Seattle Mayor Jenny Durkan: "I hate to say it, but it looks like this president is doing a dress rehearsal for martial law." pic.twitter.com/AUHkb82wPC

Instead of taking time to address the violence and destruction in Seattle, Durkan meandered off into a rant about Trump and federal law enforcement. During a later point in her interview, the mayor declared that the president is “targeting cities run by Democrats.” Durkan declined to also note that “cities run by Democrats” are objectively some of the most crime-ridden areas.

Finally, the Seattle mayor alleged that Trump’s decision to employ federal troops for “political purposes” is “chilling.” She did not share this assessment about the lootings, arson, vandalism, and other forms of mayhem happening in Seattle and other areas.

Mayor Durkan is not the first Democrat leader to censure the president’s decision to send federal troops into cities plagued with crime and she won’t be the last.

What Americans must remember is that the presence of federal troops in these localities comes after weeks of President Trump urging mayors and governors to act. Thus far, Democrats in power have allowed rioters to run amuck, smashing, looting, and burning whatever they please.

.@DHSgov notified me that federal forces deployed to Seattle have demobilized & left. The President’s actions to target Democratic cities with federal forces is chilling and increased violence in Portland, Seattle & other cities – exactly what the President intended.

This is not how law and order works in America; furthermore, this is why federal troops are being deployed to these major cities that have failed to crack down on crime.