On Monday night, Republicans held the first night of the GOP National Convention. With an array of speakers, conservatives covered a series of pointers from race, law and order, American opportunity, and the contrast between Trump and Biden’s plans for the nation.

Republican speakers at the first night’s convention spanned around various occupations, political parties, backgrounds, and experiences. Observers of the Republican National Convention also focused on policy matters and how President Trump’s reform measures can only benefit the nation and the American people. 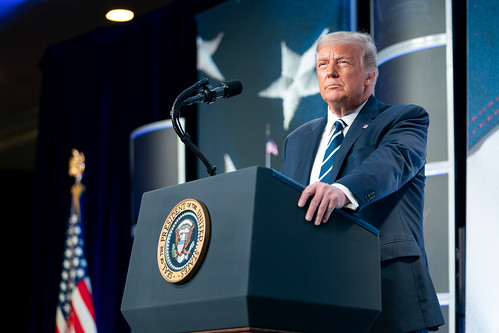 Make no mistake, left-wing media outlets have already written their hit pieces about the first night of the Republican National Convention and its speakers. However, Breitbart News provides a clear and detailed analysis of precisely what Monday night entailed.

Night One of the RNC: The Land of Promise

During last night’s Republican National Convention, the American Dream was a prevailing theme.

Contrary to narratives espoused by the Democrat Party, this nation is great; that means that when people work hard, accept personal responsibility, and make good choices, they can succeed, regardless of race, religion, gender, or background. These are points that speakers like Kimberly Guilfoyle, Donald Trump Jr., Charlie Kirk, and others made while addressing the nation.

America is a nation worth saving.@realDonaldTrump is our only hope to do that.

He is the Bodyguard of Western Civilization and the defender of our freedoms and the American Way of Life and we must deliver him four more years in the White House. pic.twitter.com/GdEAUjhKVW

Republicans also talked about the importance of law and order. Allowing police officers to do their job ensures that our land of promise remains shielded and protected.

Moreover, Mark and Patricia McCloskey addressed the nation on the first night of the GOP National Convention; the McCloskeys discussed their own experiences of protecting themselves from a vicious, angry mob, only to later be demonized in the press and threatened with legal penalities by Democrats.

More on the RNC’s First Night

Additional speakers on Monday night included Tim Scott, Nikki Haley, Vernon Jones, and others. While sharing statements, speakers took aim at the dystopian manner in which Democrats addressed the nation during their convention last week.

Republican speakers pushed back against the Democrats’ common talking points which assert America to be a racist nation. Furthermore, Democrats’ tendencies to attack individuals who fail to adhere to their ideologies and outlooks were also mentioned and strongly criticized.

Conservatives will gather again this evening to address the nation for the second night of the Republican National Convention.

Did you enjoy the first night of the GOP National Convention? Will you be watching tonight’s speakers? Be sure to let us know in the comments section below!