Throughout President Trump’s time in the White House, various staffers and aides have come and gone.

Shifts in various positions have been a subject of discussion for the president’s critics and the general public; of course, many people have not rushed to come up with their own theories for the hiring and firing of certain individuals. 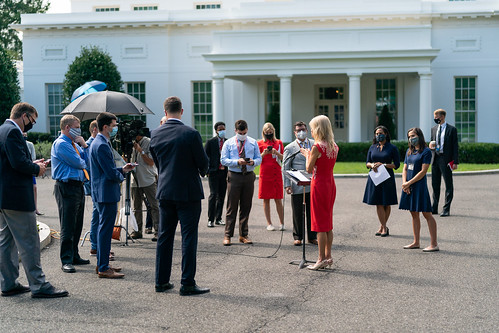 One of the staffers to last the longest was White House counselor Kellyanne Conway. As the counselor to President Trump, Conway earned this position after successfully managing Trump’s 2016 presidential campaign.

Just yesterday, however, Conway announced her decision to step down from her position at the White House in order to focus on her family, confirms Breitbart News.

What to Know About Conway’s Departure

In a statement, the counselor to the president explained that she will begin departing from the White House later this month. Conway noted that the decision to leave her job as a presidential counselor was “[her] choice and [her] voice.”

The presidential counselor has worked for Trump for several years; meanwhile, her husband, George Conway, frequently made headlines for disparaging the president. Conway even helped found The Lincoln Project, an anti-Trump “conservative” group that has regularly supported Democrats and NeverTrumpers.

God Bless You All.

As Conway steps away from her position as the presidential counselor, her husband will also be departing from his work with The Lincoln Project. Like his wife, Conway has cited family matters as the reason for severing current ties to his political work.

At this time, there have been no announcements about who will take on the job as President Trump’s counselor following Conway’s departure. However, like the rest of the nation, Trump is informed of Conway’s decision, hence giving him some time to transition in a new aide.

Claudia Conway went on live to discuss her parents George and Kellyanne Conway’s announcement to step down from their jobs. Claudia says her mom is a sociopath and has no compassion for her feelings. She claims she was abused and wants to be emancipated. pic.twitter.com/pHOlAxQu0n

The presidential counselor is still set to give remarks at the Republican National Convention this week. Both Conways’ decisions to step away from work and focus on family comes after their daughter, Claudia Conway, announced an interest in emancipating herself from her parents.

Kellyanne Conway has maintained that while she and her husband have many disagreements, their interest in the best for their children is what unites them.

Are you surprised to learn that Kellyanne Conway will be stepping down from her position as counselor to the president? Don’t hold back your thoughts in the comments section below!