Mask-wearing continues to be an intense and heated issue with heavy political undertones.

Democrats in power and even some Republicans have decided to implement mandatory mask orders; these orders are typically accompanied by various penalties for individuals who refuse. 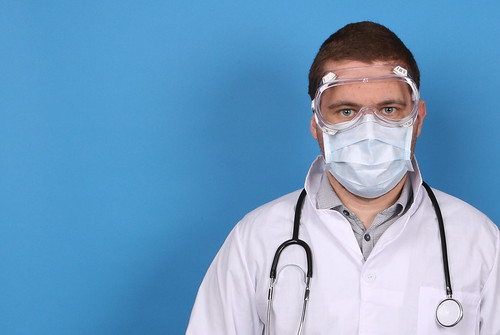 “Doctor with face mask and stethoscope an” (CC BY 2.0) by focusonmore.com

Many left-wingers are not hesitating to express their frustrations with Americans who decline to wear face coverings. Individuals who forego face masks are often branded as selfish and stupid; unfortunately, heavy proponents of face coverings have yet to acknowledge health consequences, such as acne flare-ups and “mask mouth,” that are arising from regular masking.

Now, sources report that a Pennsylvania Democrat is attempting to criminalize not wearing a mask by making it a “misdemeanor.”

Pennsylvania Sen. Art Haywood (D) is presently leading the charge to criminalize individuals who decline to wear face coverings. His proposed legislation arrived in the Senate earlier this week and seeks to classify not wearing a mask as an act of “reckless endangerment.”

In Pennsylvania, this act is considered a second-degree misdemeanor and comes with some pretty serious consequences; these consequences include a fine of up to $5,000 and two years behind bars.

This is the f’n garbage democrats want to bring to #Pennsylvania !!! F’n rioters can disrupt a lunch and destroy businesses while ⁦@billpeduto⁩ has police stand down but no mask is a misdemeanor!!! #LiberatePA ⁦@realDonaldTrump⁩ ⁦@TuckerCarlson⁩ pic.twitter.com/8x508EMqHm

In Sen. Haywood’s quest to penalize individuals without face masks, he’s made no mention of personal, religious, or medical exemptions. The Democrat senator’s legislation furthermore fails to consider documented skin and oral health issues that are arising from ongoing use of face coverings.

The Democrat lawmaker’s work to criminalize maskless individuals with hefty fines and two years in jail is not going over well.

Many Americans have taken to social media to censure the decision. Some acknowledged their own issues and objections to mandatory masking. Other Americans maintain that the government should not be locking up individuals for not wearing masks, especially when real criminals are being released from prison in states like California.

Has anyone heard about this trying to get passed in #Pennsylvania ? 2nd degree misdemeanor for not wearing a mask in public? I don’t think so. Masks are spreading the virus. pic.twitter.com/YsexIPRXwa

Multiple governors across the nation have already taken it upon themselves to implement mandatory mask orders. These orders were met by police sheriffs across the nation announcing their decisions not to enforce compulsory face covering demands.

Do you agree with the push to make not wearing a mask a misdeameanor? Should individuals without face coverings be thrown in jail while actual criminals are released from prison? Let us know where you stand on this issue down below in the comments section.