As time goes on, an increasing number of Democrat governors are coming under fire for their responses to coronavirus. The blowback deals with not only shutdowns and face mask mandates, but also the decisions to put coronavirus-positive patients into nursing homes.

At worst, such decisions are being branded as woefully negligent; at worse, others are calling them homicide and stating that responsible governors should face legal accountability for their actions. 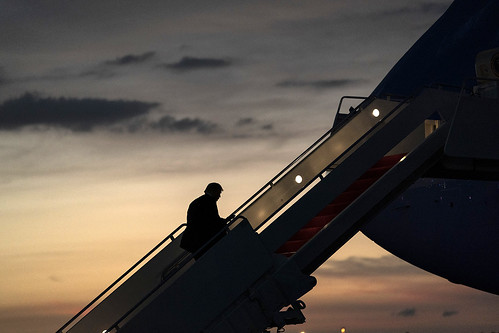 “President Trump in Florida” (Public Domain) by The White House

Another common parallel between Democrat governors is their tendency to criticize the president and his administration’s response to COVID-19.

This is something New York Governor Andrew Cuomo (D) levied against the president recently; however, Cuomo was effectively put in his place not too long afterward, according to Breitbart News.

What to Know About Cuomo’s Attacks Against President Trump

Despite previously commending the Trump administration’s response to the infamous coronavirus, Cuomo chose to articulate his thoughts on the president’s “mistakes” earlier this week.

The president has to tell the American people the truth.

It was a mistake to downplay COVID.

It was a mistake to say it would be gone by Easter.

It was a mistake to say it will magically disappear.

And it was a mistake to not set up a national testing program. pic.twitter.com/YOJosnHy6a

During a press conference, the New York governor accused Trump of “downplaying” coronavirus and stated that the president had not truthfully informed Americans about the seriousness of COVID-19. In a series of tweets, Cuomo also accused Trump of politicizing face masks.

The Response from Vice President Pence

Despite Cuomo’s attempt to get on his soapbox and feign moral superiority, many Americans simply didn’t fall for it. One of those Americans just so happened to be Vice President Mike Pence.

During an interview with Fox News’ Laura Ingraham, the vice president actually responded to Cuomo’s jabs against Trump. In doing so, Pence drew attention to the reality that the New York governor’s “poor decisions” enabled at least 20% of lives lost to coronavirus to occur in New York.

Governor Cuomo has said repeatedly that President @realDonaldTrump’s leadership in the pandemic was “phenomenal” as we surged testing, surged PPE, sailed in a hospital ship, built hospitals in New York. I couldn’t be more proud of the support that we rendered to the people of NY.

The vice president additionally reminded the nation that Cuomo has beforehand lauded the Trump administration’s response to coronavirus as “phenomenal.” To be clear, the New York governor is on record previously giving the president accolades for constructing hospitals in New York, increasing access to testing, boosting access to personal protection equipment (PPE), and more.

Finally, Pence stated that Cuomo’s decision to congratulate the Trump administration only to later “[pivot] to criticism” is just a show of politics.

What do you make of the New York governor’s response to coronavirus? Are you surprised that he did an about-face, going from praising the Trump administration to slamming it? Let us know down below in the comments section below!