This week alone has consisted of significant campaigning for President Trump’s re-election.

As the president’s ads appear on various screens in different parts of the country, Trump and first daughter Ivanka Trump are also traveling across America to connect with voters. While the president spent time in Minnesota on Friday, the eldest first daughter traveled to North Carolina, Texas, and Florida earlier this week. 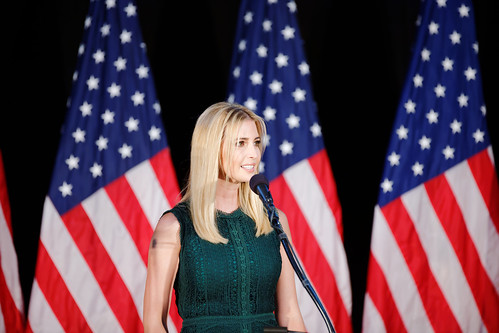 Reports from Fox News show that Ivanka Trump’s visits to Texas and Florida have significantly benefited her father’s presidential campaign; the first daughter’s time in the Lone Star and Sunshine States ultimately generated $7.5 million this week.

On Tuesday, the first daughter spent time in Austin, Texas; during this period, Trump attended the fundraiser known as Austin for Trump Victory.

Her visit to the Lone Star State arrives as Biden and his allies work to flip Texas blue; the Trump campaign has implied in no uncertain terms their confidence that Biden will not win over the traditionally conservative Texas.

Next, on Wednesday, Trump spent time in Tampa, Florida to campaign for her father at yet another fundraising event. During this event, the first daughter spoke before an audience and answered various questions regarding the current presidential race.

In attendance at the Florida fundraiser was also former attorney general of Florida Pam Bondi. Analyses of both fundraisers show that the first daughter’s visit in Texas generated $4.5 million while her time in Florida raked in $3 million for the Trump campaign.

Amid the first daughter’s time fundraising this week, critics of the Trump re-election have alleged that the campaign is cash-strapped; however, the Trump 2020 team tells a different story.

In fact, the president’s campaign has repeatedly come out with various ads that detail the benefits of Trump’s presidency while also slamming Joe Biden. Some pointers noted in the ads include the president’s benefits to the job market, commitment to law and order, etc.

Meanwhile, Biden’s feet are held to the fire for being soft on crime, weak towards China, and controlled by the socialist left. The former vice president also nearly crossed paths with Trump on Friday, seeing as both presidential candidates were in Minnesota.

What do you think about Ivanka Trump’s fundraising for the Trump 2020 campaign this week? Do you think President Trump will win Texas and Florida in the general election? Let us know down below in the comments section.