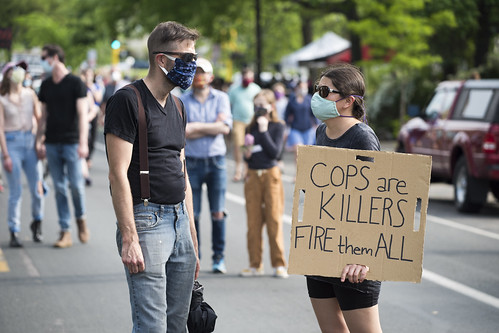 “Protest against police violence – Justic” (CC BY 2.0) by Fibonacci Blue

The protests did not stop on Wednesday, however. The following day, more rioters returned to continue their violent demonstrations, prompting further destruction and clashes with law enforcement.

Now, sources confirm that Minnesota Governor Tim Walz called in the National Guard yesterday to deal with the increasing unrest and onslaughts.

What to Know About the National Guard in Minnesota

On Thursday, several blocks in Minneapolis succumbed to the destruction from rioters. Restaurants, bus services, and other businesses voluntarily shut their doors, anticipating the violence and carnage to come. Furthermore, multiple rioters took it upon themselves to rush stores with the intention of even more looting and theft.

the “rioting” happening in minnesota is definitely going to help end the stereotype that blacks are criminals. good job black lives matter. such a wonderful protest. pic.twitter.com/NC8IxHtWnz

For these reasons, and in light of the riots on Wednesday night, Gov. Walz called in the Minnesota National Guard. This was a calculated measure to stop additional damage and decrease the likelihood of further harm coming to business owners, innocent bystanders, and others who may get caught in the crossfires of irate rioters.

Looting is now widespread in the city, with reports of looting miles away from the original protest location. #minneapolisriots #GeorgeFloyd pic.twitter.com/CfkaiO1iui

As the National Guard does their job, many Americans are questioning the logic behind tearing up Minneapolis. While viral footage of stores and other businesses being looted trends on social media, people are noting differences between peaceful protests and violent riots.

Late yesterday afternoon, the Minnesota governor urged Minneapolis residents to begin “rebuilding” the city, justice system, and relationship between law enforcement officials and civilians. Walz also noted that George Floyd’s family did not want violence in response to his death.

As George Floyd’s family has said, he "would not want people to get hurt. He lived his life protecting people." Let’s come together to rebuild, remember, and seek justice for George Floyd.

As Governor, I will always defend the right to protest.

It is how we express pain, process tragedy, and create change. That is why I am answering our local leaders’ request for Minnesota National Guard assistance to protect peaceful demonstrators, neighbors, and small businesses in Minnesota.

What do you think about the Minnesota National Guard being called in to deal with violent riots yesterday? How much worse do you think the situation will get? Let us know what you anticipate in the comments section down below!