Across America, various riots have scourged communities, cities, and innocent lives. As the political left cheers these acts of destruction on or merely writes them off as “peaceful protest,” everyday Americans are left to pick up the pieces.

There are countless business owners who have found themselves caught in the crossfires of individuals who looted, torched, or otherwise destroyed businesses in the alleged quest for social justice. Democrats have not indicated any plans to acknowledge this reality or the toll that such destruction takes on people’s lives and livelihoods. 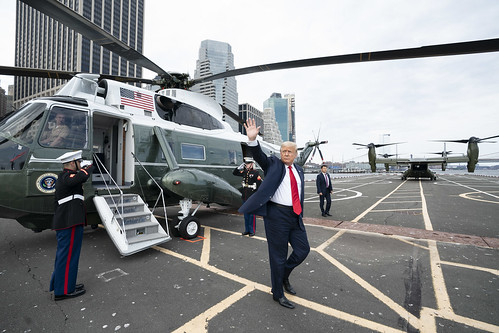 However, President Trump does understand and empathize with the pain that these Americans are dealing with.

On Monday, the president traveled to Minnesota to meet with business owners who were negatively impacted by weeks upon weeks of riots, according to Breitbart News.

A Closer Look at President Trump’s Visit to Minnesota

During Trump’s time in Minneapolis, he expresses sympathy for residents who watched their dreams “burn to the ground” amid riots and social unrest. The president also criticized Democrat leaders for failing to take the effective, swift action that was necessary to stop these crimes.

While visiting Minnesota, the president talked with pharmacy owners, sports bar owners, auto repair shop owners, etc. who had their businesses destroyed by looters and agitators.

Many of these small business owners informed to have put their life savings into starting their establishments; Minneapolis entrepreneurs additionally noted that they’re now in the process of attempting to rebuild.

A Ray of Hope for Minnesota Business Owners

The president’s visit to Minneapolis extended beyond merely hearing the stories of struggling business owners. In addition to doing this, Trump took down the names of impacted entrepreneurs before vowing to help them as much as he could.

This arrived as many small business owners in Minneapolis noted their frustration with rioters not being held accountable for their plethora of crimes.

After 47 years of failure, we’ve had more than enough of Joe Biden. pic.twitter.com/9sbGN7tciR

President Trump addressed this point as well, stating that the Minneapolis community desperately needs police; this comes in spite of Minneapolis doing its best to defund and abolish its own police department.

Are you surprised to hear the accounts of small business owners who have suffered due to riots, lootings, and social unrest? What do you think about President Trump’s visit to Minnesota yesterday? Be sure to share your thoughts and views with us down below in the comments section.