While mandates continue to appear in various cities, businesses, retail stores, etc., more instances of people resisting are also materializing. To date, viral videos of people pushing back against mask mandates have trended on social media. 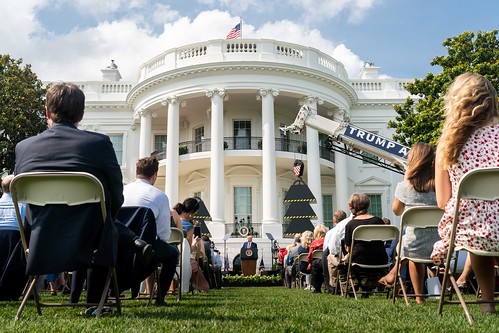 More and more police sheriffs across the country are coming out and stating that enforcing compulsory masking is the least of their concerns.

With that in mind, some Americans are calling for a national mask mandate, claiming that such a mandate would greatly lessen non-compliance; however, this has only intensified debates about freedom in this nation, according to Breitbart News.

Trump aides and others close to the administration have already come out and stated that there will be no national mandate for citizens to wear face masks. However, this has not stopped certain Democrats, corporate CEOs, and others from continuing to call for it.

These calls have inevitably placed a spotlight on President Trump. While the president has previously declined to wear a mask in public, there are select instances when Trump made the choice to “mask up.” Therefore, this led some folks to question whether or not there may be hope for a national mask mandate after all.

NEW: "I want people to have a certain freedom."
President Trump says he would not issue a national mandate requiring masks to be worn at all times. #FoxNewsSunday pic.twitter.com/kIvOCTUwyC

Conservatives and others who oppose the idea of an executive order requiring all Americans to wear face coverings can rest easy though. During a Fox News interview set to air tomorrow, the president confirmed that he will not issue a national mask mandate.

Trump explained that he doesn’t believe in such a mandate and instead cherishes “a certain freedom.” Moreover, the president pushed back against the assertion that coronavirus will simply disappear if every single person puts on a face mask when they’re out.

The president’s decision not to issue a national face mask mandate certainly makes a difference; however, there are still some people in various positions that harbor a vested interest in forcing masks on as many people as possible.

Dr. Anthony Fauci said on Friday during the interview with the U.S. Chamber of Commerce: "I would urge the leaders, the local, political and other leaders, in states and cities and towns, to be as forceful as possible in getting your citizenry to wear masks." pic.twitter.com/jfWSd4kfX7

Earlier this week, controversial coronavirus task for Dr. Fauci professed that state and local governments ought to be as “forceful” as possible in getting individuals to wear face coverings. This type of rhetoric is already facing intense backlash from right-wingers and others who do not wish to live in a tyrannical nanny state.

What do you think about the ongoing controversy surrounding face masks and applicable government mandates? Are you glad that President Trump will not issue a national mask mandate? Let us know what you think down below in the comments section.