The socialist left continues to push the incorrect narrative that “systemic racism” exists in the United States.

This narrative claims that people of color are inherently disadvantaged and underprivileged in society merely due to the color of their skin. Many individuals of all races have eaten this up, despite it being a lie told by Democrats merely for the sake of political gain. 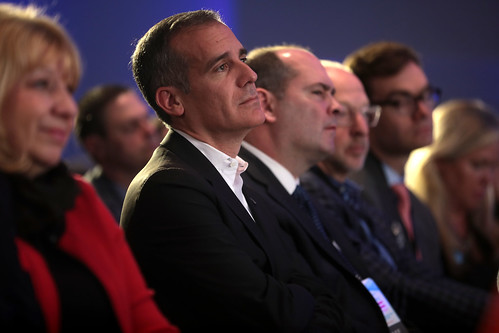 Yesterday, Los Angeles Mayor Eric Garcetti struggled to articulate a real definition for “systemic racism.” However, sources do note the Los Angeles mayor’s choice to rattle off a series of collectivist statistics that he believes are supportive evidence of “systemic racism” in America.

The Los Angeles Mayor on “Systemic Racism” in America

When asked during a press conference for a specific definition of “systemic racism,” Garcetti fumbled. The best he managed to come up with was “racism that’s built into systems.”

Shortly thereafter, the Los Angeles mayor cited slavery, events after slavery, and starting “fifty yards behind everyone else” as examples of supposed systemic racism.

What Garcetti forgot to consider is that slavery and even events after slavery ended a very long time ago. Moreover, this claim that black people begin “fifty yeards behind everyone else” is often used by Democrats to erase the individual responsibility that people have in the outcomes they experience.

Before concluding his remarks about “systemic racism,” the Los Angeles mayor claimed that black Americans are likelier to suffer from poor health, incarceration, low education, and unemployment.

If you’ve been to a protest, thank you for making your voice heard and supporting the cause of racial justice. With COVID-19 still spreading in our community, please consider self-quarantining for 14 days and schedule a free test here: https://t.co/rHWABmXUEl.

Again, these are areas where personal choices and decisions come into play. Democrats will never admit this, though; the narrative of inescapable black victimhood is just too politically advantageous for the left.

What do you think about the Los Angeles mayor’s statements on “systemic racism” in America? Let us know down below in the comments section.