Over the past week alone, the riots and violent outbreaks in Kenosha have reached truly deadly levels.

Aside from the danger to come from small businesses being looted and mobs ravaging streets, multiple individuals have already lost their lives. Last month, Americans learned that 17-year-old Kyle Rittenhouse from Illinois is facing homicide charges for shooting and killing Kenosha rioters. 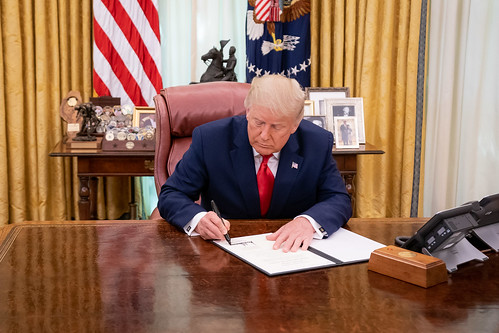 Perceptions of whether or not Rittenhouse’s actions were justified continue to be debated in the court of public opinion. However, Breitbart News reports that President Trump defended the actions of the 17-year-old on Monday.

Yesterday, the president participated in a press conference at the White House. During this time, Trump was asked about the situation surrounding Rittenhouse.

The 17-year-old is facing fierce attacks from many people who are eager to paint him as a villain; members of the political left (and others who have taken lackadaisical attitudes towards rioters) are much likelier to adopt this outlook than conservatives and Americans who oppose lawlessness.

Trump asked about Kyle Rittenhouse, the 17-yr-old arrested after 2 people were fatally shot during riot:

"That was an interesting situation… He was trying to get away from them, I guess … & he fell & then they very violently attacked him…he probably would've been killed." pic.twitter.com/oSW0ZpOd4W

On Monday, the president weighed in with his assessment after viewing the footage of Rittenhouse shooting three rioters. Trump stated that Rittenhouse faced “big trouble” and could have lost his life, had he not discharged his firearm. However, the president also affirmed that the matter is “under investigation.”

A Rise in Political Violence

Between the police confrontations with George Floyd and Jacob Blake, political violence has surged across the nation over the course of this summer.

Many Americans are arguing that Democrats have a role in this. Up until days ago, the left was describing arson, looting, vandalism, and other similar acts as “peaceful protest.”

In the wake of public backlash and the riots’ impacts on the 2020 presidential election, Democrats are now trying to distance themselves from destruction in Kenosha and other cities.

Just watched what Biden had to say. To me, he’s blaming the Police far more than he’s blaming the Rioters, Anarchists, Agitators, and Looters, which he could never blame or he would lose the Radical Left Bernie supports!

Over the weekend, Joe Biden announced that he doesn’t condone violence whether it happens on the political left or right. However, this condemnation arrives after a significant dip in the polls; it also comes following the former vice president’s admission that he supports defunding the police via a “redirection” of funding.

What do you think about the situation and legal issues facing Kyle Rittenhouse? Do you agree with President Trump’s assessment of the shootings? Be sure to share your thoughts with us in the comments section below!