A time of reckoning is starting to arrive for rioters in America.

Over a course of months, the nation has sat back and watched angry individuals ruin communities while pretending to fight for social justice.

As businesses are looted and torched, and as riots and fights break out in the streets, Democrat leaders are doing nothing to stop it. As a matter of fact, leftist governors and mayors have even rejected the federal government’s offers to step in and get matters under control. 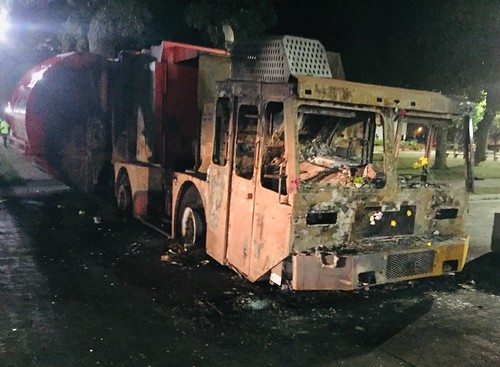 Democrats may be OK with this, but Republicans are not. Earlier this month, the Tennessee governor signed into law legislation which would increase legal penalties for rioters, including the loss of one’s voting rights.

On Friday, Indiana Rep. Jim Banks (R) put forth a bill that would block rioters from receiving any COVID-19 from the government, documents Fox News.

What to Know About Rep. Banks’ Proposed Legislation

The Indiana Republican furthermore seeks to have convicted rioters foot the bill for the presence of federal agents that have to be sent into communities to stop riots.

During a WIBC-FM radio interview, Banks explained that convicted individuals who contribute to a greater need for law enforcement in communities ought to “be on the hook” to cover those expenses.

Hey @SpeakerPelosi, these are my constituents. They are good people.

If you told these mobs to stop, I have a feeling they would … https://t.co/l5qIT52XM4

Banks’ explained that his decision to put forth the Support Peaceful Protest Act arrived after leftist demonstrators threatened and harassed individuals on the fourth night of the GOP National Convention.

The Indiana representative maintains that while he supports peaceful protest, attacks on federal resources must end. Banks also noted that many of the individuals going out and committing these crimes are able to do so because they’re unemployed and getting assistance from the federal government.

If the bill I introduced today passed into law, these people seen here (illegally blocking traffic) would become ineligible for federal coronavirus aid and have to pay for the policing cost of their spectacle. https://t.co/V3wFJe5jwZ

Ultimately, Banks’ legislation seeks to stop acts of violence happening across the country. The conservative representative explained that lawbreaking rioters should not get the benefits of other people’s tax dollars or go without consequences.

What do you think about Indiana Rep. Banks’ legislation to stop riots across the nation? Be sure to let us know in the comments section below!