Law and order has always been a central part of President Trump’s political brand.

Since mass riots across the nation and left-wing calls to defund the police, the president’s support for law and order has reached new levels.

Trump and the Department of Homeland Security (DHS) continue to work with one another to bring an end to violence happening in various cities; however, Democrat state leaders are complicating this process by refusing to accept help from the federal government. 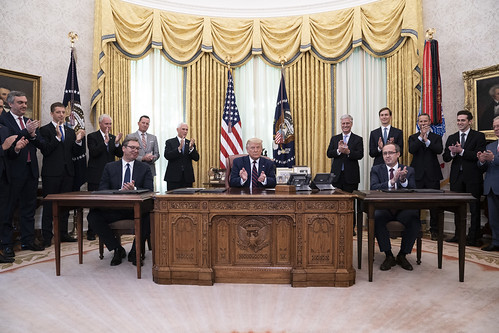 Amid calls to defund the police, the president has clearly articulated his support for police and the law enforcement community. Furthermore, Trump also continues to back policies that allow police to do their jobs.

This is why the Fraternal Order of Police endorsed President Trump’s re-election campaign on Friday, confirms Breitbart News.

At this time, the Fraternal Order of Police is the largest police union in the nation. Patrick Yoes, the national president of the union, maintains that the endorsement of Trump’s 2020 campaign was a “unanimous” decision.

On behalf of the 355,000 members of the Fraternal Order of Police, we are proud to unanimously endorse @realDonaldTrump for President of the United States. #FOP4Trump pic.twitter.com/uAF6SWNRnA

In a public statement, the Fraternal Order of Police lauds President Trump’s support for the work and challenges that police officers face. The largest police union professed that Trump has their “full and enthusiastic support” after commending his calls for law and order across the country.

This latest endorsement comes after a string of additional endorsements from other police associations and law enforcement groups.

Reaction from President Trump and Conservatives

Since the endorsement from the Fraternal Order of Police, the president has thanked the union. Taking to Twitter, Trump described the group’s endorsement as a “great honor.”

Like the president, conservatives and other members of the Trump base are praising the Fraternal Order of Police’s support. Since the rise in riots, attacks on police officers, etc., the president has continued to work with law enforcement officials at various levels.

A GREAT HONOR, THANK YOU! https://t.co/SYM0wk5cqn

As Trump recieves endorsements from various police unions, Biden continues to come under fire for his response to riots. Conservatives are also pointing out the former vice president’s tendency to find fault with law enforcement officers before rioters.

What do you think about the Fraternal Order of Police’s decision to endorse President Trump? How do you think this endorsement will impact the 2020 presidential election? Be sure to let us know in the comments section below!