The rise of the radical left-wing mob is becoming more obvious with each passing day. Right now in America, folks are losing their jobs, being “cancelled” online, and otherwise facing public shame for daring to question the radical left.

As all this plays out, Black Lives Matter has managed to bully various Democrat leaders into defunding their own city police departments. Anarchists are being given permission to loot and riot with little to no legal consequences; meanwhile, left-wing elected officials are naming entire streets and roads after Black Lives Matter. 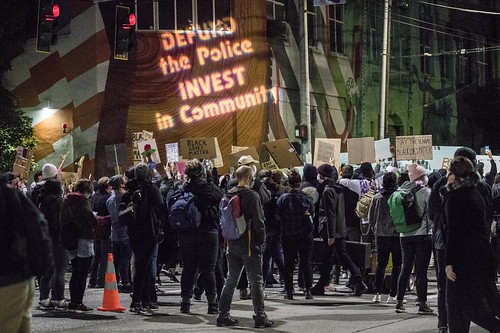 “Defund the Police projections in Seattle” (CC BY 2.0) by Backbone Campaign

It doesn’t take a genius to see that the left’s tyranny is deeply problematic and unamerican. This tyranny subsequently served as the subject of Fox News host Tucker Carlson’s Tuesday night segment, according to sources.

What to Know About Carlson’s Statements on the Leftist Mob

Carlson kicked off his segment by noting the left’s attempt to target his show, due to his prior criticism of left-wingers and their poor actions. After pointing this out, Carlson explained that the left’s attempt to shut him down only highlights the need to get more specific about the mob.

Branding the leftist mob as “faceless political agitators” and “trolls who thrive on cruelty,” the Fox News host did not mince words. In addition to holding the radical left to task, Carlson also called out the spineless Democrat leaders who have chosen to bow to extremist demands.

Some examples of said spineless leaders are Mayors Eric Garcetti and Bill de Blasio; both mayors have chosen to remove funding from their city police departments, following demands from Black Lives Matter.

Towards the end of Carlson’s segment, he warned that while Democrats are loving the leftist mob, the GOP has a duty to shield Americans from tyranny. In so doing, the Fox News host called out Republicans, such as Senate Majority Leader Mitch McConnell, who he believes are failing to protect the people of this nation.

What do you think about Tucker Carlson’s analysis of the vicious, left-wing mob? Sound off with your thoughts in the comments section below!