For a fair amount of time now, Dr. Anthony Fauci has faced criticism from conservatives across the nation.

While the left is more than happy to sing Fauci’s praises, plaster him across magazine covers, and lift him up, right-leaning Americans have certain concerns. The unique partisan link between different outlooks on Fauci only speaks to the extent to which coronavirus has been politicized. 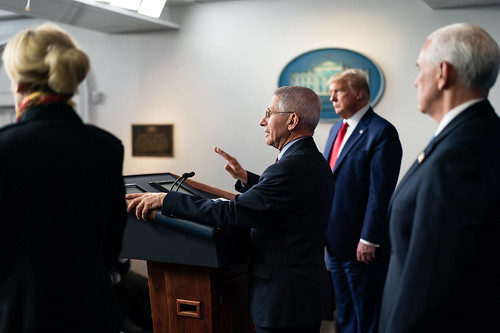 One of Fauci’s most outspoken critics is Fox News host Tucker Carlson. On multiple segments, Carlson has gone after Fauci, pointing out the flaws and inconsistencies within the latter’s statements.

On Friday, Fauci responded to censure from the Fox News host, according to Breitbart News.

Fauci vs. Carlson: What You Need to Know

On several occasions, Carlson has criticized Fauci for dishonesty and even pandering to the left-wing. Likewise, the Fox News host branded the coronavirus task force doctor as a “total fraud” for failing to directly answer a question about whether or not left-wing protests contribute to the spread of COVID-19.

Another issue that Carlson has articulated regarding Fauci is the latter’s failure to consider seriously devastating impacts that come from his advice to lock down the United States. The Fox News host has noted that while Fauci himself isn’t adversely impacted by schools and businesses being forced to shut down, millions of other Americans are.

On Friday, though, Fauci decided to push back against criticism from the Fox News host. During an interview with The Washington Post, Fauci accused Carlson of “triggering” unstable individuals in society.

The coronavirus task force doctor also claimed that while he does not feel “concerned” about Carlson’s statements, he does believe the statements have encouraged death threats against him.

Why Fauci Faces Criticism from the Political Right

There are several instances that are causes of concern for Americans as it pertains to Fauci.

The doctor’s swift about-face on face mask mandates is one issue, as is his previous calls for the government to become “as forceful as possible” in making Americans cover their faces in public. This didn’t sit well with many conservatives who oppose giant government and already have issues with the dubious science behind mandatory masking.

During multiple congressional testimonies, Fauci has also spoken from both sides of his mouth. Despite frequent contradictions, however, there is still a sizeable group of Americans hanging onto every word from the coronavirus task force doctor.

What do you think about the remarks that Tucker Carlson and Anthony Fauci have made about one another? Enlighten us with your thoughts down below in the comments section.