The issue of face mask-wearing continues to dominate political and social conversations. In the wake of new reports of COVID-19, politicians and health “experts” continue to flaunt face coverings as the best strategy to stop the spread.

Of course, some political and health officials have taken it upon themselves to mandate that certain residents cover their faces while in public. While some people are all for mask requirements, many are not. As such, there are already several lawsuits against officials who have taken it upon themselves to order Americans to wear face masks in public. 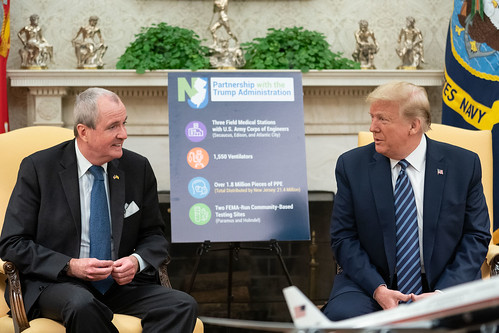 The debate about mask mandates isn’t ending anytime soon. As a matter of fact, there are talks on the political left about a national mask mandate for all Americans.

The idea of forced masking for everyone in the country has garnered endorsements from New York Governor Andrew Cuomo, 2020 Democrat Joe Biden, House Speaker Nancy Pelosi, and others.

Now, according to Breitbart News, New Jersey Governor Phil Murphy is the latest to call for a national mask requirement.

Why Does the Left Want a National Mask Mandate?

During an interview with Meet the Press, the New Jersey Governor didn’t hesitate to call for a national mask mandate.

Murphy stated that it’s “almost undebatable” that everyone across the country should be wearing face coverings while in public. He also alleged that COVID-19 is “more lethal” in indoor spaces rather than outdoors; however, Murphy left out that the virus is more than 99% survivable.

After endorsing the idea of forced masking for all Americans, the New Jersey governor called for “federal cash assistance” to aid restaurants and small businesses that are forced to close their doors yet again.

Over the past several weeks, fiscal conservatives and Republicans have warned about the dangers of government constantly spending money it doesn’t have; clearly, though, the Democrat governor has a contrasting outlook on the matter.

Will President Trump Sign off on a National Mask Mandate?

The president has spoken positively about mask-wearing; however, he’s stopped short of praising forced masking. During a Fox Business interview, Trump stated that while he’s “all for masks,” he’s not sure about the idea of a national requirement.

“I don’t know if you need mandatory,” Trump said when asked on Fox Business Network whether he would support a national order for people to wear masks in public. “But I’m all for masks, I think masks are good,” adding he's been seen wearing one in groups.

During this time, the president also noted that there are many areas across the nation where people maintain social distancing of six feet apart or more. All things considered, the likelihood of the president issuing a national mask requirement is extremely low.

What do you think of forced masking for all Americans? Should face coverings be voluntary or mandatory? Let us know in the comments section below!