House Speaker Nancy Pelosi has repeatedly made headlines for refusing to work with congressional Republicans and President Trump. The Democrat speaker’s “my way or the highway” approach is responsible for countless impasses, and not at the best times either. 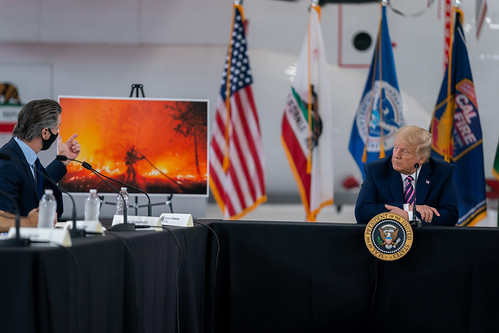 “President Trump in California” (Public Domain) by The White House

Many leftists have cheered the House Speaker for repeatedly mocking the president or referring to Republicans as “domestic terrorists.” However, congressional Democrats are getting a front-row seat at the negative consequences that arise when the speaker of the House is unwilling to work across the aisle.

Now, fresh information from Breitbart News confirms that some of the more moderate Democrats in Washington are growing exasperated with Pelosi and her poor manner of working with the GOP.

The greatest issue of contention for many Democrats in Washington deals with COVID-19 aid or rather, the lack thereof.

The House Speaker has repeatedly laid out her demands for what she wants in a coronavirus stimulus package; Pelosi also has yet to show any willingness to compromise or meet the GOP in the middle.

These ultimately leaves struggling Americans in the crossfires of political battles, hence the frustration of more moderate congressional Democrats.

If you see a train coming, you tell people to get out of the way.

The President saw the virus coming and told the American people it was a hoax. #TheReidOut pic.twitter.com/s0bvqA8tEv

Virginia Rep. Abigail Spanberger (D) has stated that Congress must “bring something to the floor” and “come up with a solution” for Americans. New York Rep. Max Rose (D) has also echoed similar sentiments, stating that both Republicans and Democrats bear responsibility for the stalemate.

Even House Majority Leader Steny Hoyer (D) is encouraging Speaker Pelosi to switch from her “my way or the highway” approach to working with Republicans. Thus far, the California Democrat still has yet to indicate any willingness to seriously work with the GOP.

Pelosi’s refusal to work with Republicans has earned her criticism from the right-wing also.

Foreign Minister of UAE: This peace deal would not have been possible without President @realDonaldTrump pic.twitter.com/q0bBxRru77

The running theory here is that since Pelosi doesn’t want to help Trump look good, she’s winning to let Americans struggle if it increases the likelihood of Biden winning the 2020 election.

Are you surprised that even moderate Democrats are calling on the House Speaker to work across the aisle with Republicans? Is Pelosi playing politics with Americans’ livelihoods? Let us know down below in the comments section!