Collective pushback against stay-at-home orders and economic shutdowns is growing with each passing second in America. Despite the left’s attempt to brand these things as a so-called “new normal,” the people of this nation are simply not having it.

Governors across multiple states are being sued and challenged in the Supreme Court over their Executive Orders than ban tens of millions of Americans from working. Likewise, some businesses and counties are choosing to reopen in defiance of governors’ orders. 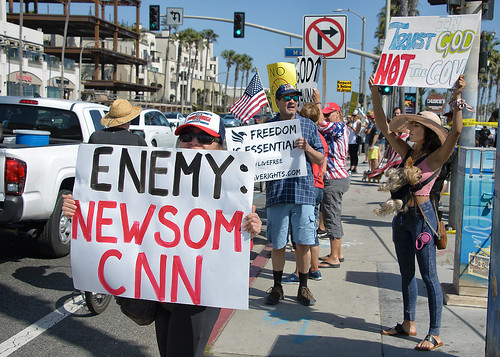 We also cannot forget the anti-shutdown protests happening on an almost daily basis and surging number of law enforcement officers who cite their refusal to uphold unconstitutional orders.

Chad Bianco, the Riverside County, California sheriff, has joined the list of law enforcement officers who are taking a stand against tyrannical mandates.

When declaring his refusal to enforce the California governor’s mandate, Sheriff Bianco addressed the Riverside County Board of Supervisors; he also did not mince words.

The law enforcement leader slammed the government for putting constitutional liberties and rights on hold. Shortly thereafter, Bianco stated that the current data of COVID-19 cases shows that “less than a tenth of one percent” of Riverside County residents actually have the virus.

After stating that government’s decisions must be rooted in concrete data, rather than “protections and fear,” Sheriff Bianco then addressed additional problematic consequences that would come from enforcing Newsom’s order.

Put simply, the Riverside County sheriff has decided not to criminalize residents who are simply trying to make a living by operating their businesses or enjoying constitutional rights. Bianco furthermore pointed out that he believes people in Riverside County have the ability to “proceed cautiously” and make responsible choices.

Do you believe the Riverside County Sheriff is making the right call by refusing to enforce California Gov. Gavin Newsom’s unconstitutional stay-at-home order? Let us know in the comments section below!