Just days ago, President Trump took time to travel to Kenosha, Wisconsin. Ultimately, the purpose of the president’s visit was to engender unity and display leadership; in doing so, Trump met with Kenosha police officers while also surveying the damages brought about by nights of destruction and vandalism.

Now, the president also took flack from the Democrats for his decision to visit Kenosha, following the Jacob Blake shooting. Leftist critics, including the Kenosha mayor and Wisconsin governor, alleged that Trump’s visit would only worsen matters; nonetheless, Trump still acted as a leader, meeting with the proper officials in the city. 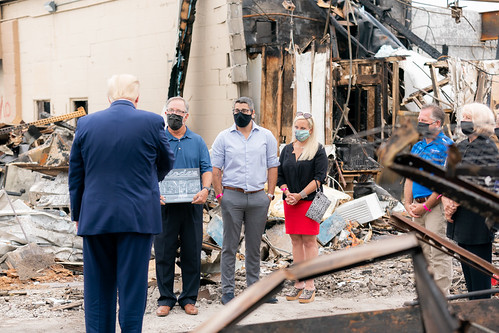 Despite Democrats slamming the president’s visit, it also appears that they’re not unwilling to take a page from his book.

Yesterday, Biden followed in the president’s footsteps by visiting Kenosha as well; however, Trump’s 2020 re-election team is slamming Biden for the visit, stating that it happened for thoroughly political reasons, per Fox News.

The Truth About Biden’s Visit to Kenosha

Prior to Biden’s time in Kenosha, his campaign announced that he and his wife would convene with “community leaders” before meeting relatives of Jacob Blake.

However, a notable contrast between Trump’s visit and Biden’s visit is that while the former vice president met with Blake’s family, Trump did not. Earlier this week, the president explained that although he attempted to reach out to relatives of Blake, they didn’t want to meet with him without the presence of attorneys.

Community member at Biden meeting in Kenosha appears to have been given a scripted question:

“I’m gonna be honest, Mr. Biden. I was told to go off this paper but I can’t.” pic.twitter.com/5daVBKK5PX

Erin Perrine, the press communications director for Trump’s re-election campaign, is sharing new insight though. During an interview with Outnumbered Overtime, Perrine explained that while Trump’s Kenosha visit happened in “official capacity,” Biden only went for political reasons.

The press communications director then went on to admonish Biden for his attempt to “politicize” matters in Kenosha. It’s worth noting that the former vice president’s visit to the city comes after ongoing criticism of his response to Kenosha riots.

During the former vice president’s time in Kenosha, there were certain peculiar incidents that didn’t go unnoticed. One of these bizarre occurrences arrived when a community leader seemed to imply that she was given a script to read, yet didn’t feel comfortable doing so.

Joe Biden says he won't lay out details of his tax plan in Kenosha "because they'll shoot me" pic.twitter.com/j2dNVdwROZ

Americans also raised their eyebrows upon hearing Biden talk about a potential tax plan for Kenosha. The former vice president declined that he couldn’t get into extensive details about it because “they” would “shoot [him].”

What did you think about Joe Biden’s visit to Kenosha, Wisconsin yesterday? Chime in with your thoughts in the comments section below!