The Second Amendment is near and dear to the hearts of many Americans, especially conservatives.

Millions of individuals across the nation take seriously their constitutional right to keep and bear arms; however, the issue of the Second Amendment continues to remain heavily politicized. This politicization continues as the 2020 presidential election heats up with Trump and Pence versus Biden and Harris. 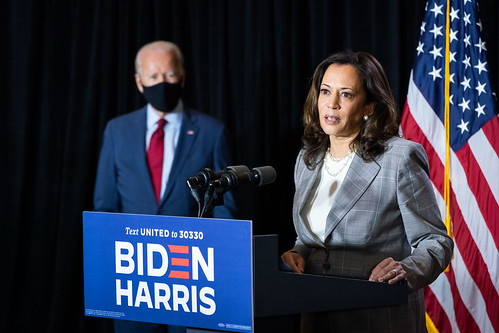 Right now, the 2020 Democrat ticket is taking heat for their support of heavy gun control. Both the former vice president and the California senator are on record supporting “mandatory buybacks” which is merely a fancier way of saying “government-sponsored gun confiscation,” according to Breitbart News.

Despite coverage from the liberal press, both Biden and Harris have confirmed their interest in “buying back” firearms that Americans have purchased. While Biden has gone on record stating that “assault weapons” ought to be “illegal” in the United States, Harris has championed “[taking] those guns off the streets.”

Naturally, there are millions of Americans throughout the country who don’t, at all, agree with these positions. Critics of gun control have noted that citizens of this nation reserve the right to keep their guns. Others have dared Democrats like Biden, Harris, and others to come and try to take their firearms.

The choice we make this November will decide the future of America.

I have no doubt @KamalaHarris is the right partner to join me to lead our nation through this moment. pic.twitter.com/YdJFksiCrI

Furthermore, Biden previously stated that if he becomes the next president, he’ll enact a “national buyback program.” Of course, this program would be mandatory.

On social media, certain fact-checkers have attempted to dispute claims that Biden and Harris seek to confiscate Americans’ guns. Of course, one must only listen to the words from the Democrats’ own mouths to learn that forced gun confiscation is precisely what the Biden-Harris ticket has in mind for the United States.

Pushback from the Trump Campaign

President Trump’s 2020 campaign has gone after both Biden and Harris for their support of gun confiscation.

THE BEST IS YET TO COME!pic.twitter.com/l8bK5TAB0B

Just earlier this week, the president himself warned that Biden and Harris in office would essentially bring about the downfall of the Second Amendment. Trump also talked about the Democrat ticket’s interest in revoking Americans’ rights to defend themselves; this interest arrives notably as the left moves to defund police departments across the nation.

What do you think about Joe Biden’s and Kamala Harris’ stance on the Second Amendment and gun confiscation? Be sure to let us know in the comments section below!