Crime in Democrat-run communities has surged for months on end now. From vandalism to looting, tearing down monuments, setting small businesses on fire, attacking police, etc., these demonstrations are not peaceful, despite claims from the left.

As the crime surges continue to happen, they’re playing a role in politics. More specifically, Republicans are warning that the perils of left-wing leadership where this violence is happening will spread across America if Joe Biden wins the 2020 election. 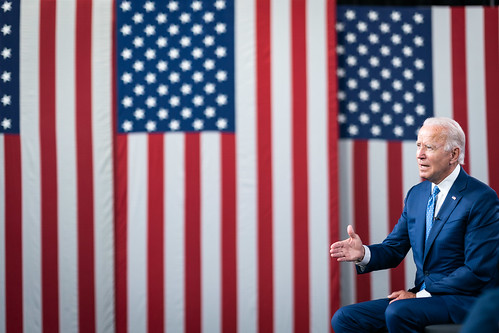 Biden’s team is attempting to push back against this, however. On Sunday, Kate Bedingfield, Biden’s deputy campaign manager, went on Fox News and falsely accused President Trump of egging on violence, “this entire summer,” reports Breitbart News.

Why is Biden’s Campaign Accusing President Trump of Inciting Violence?

During Bedingfield’s time on Fox News Sunday, she professed that the president hasn’t “united” the nation or “[led] on the coronavirus.” Biden’s deputy campaign manager also made sure to claim that Trump has worked to “incite violence” throughout the entirety of this summer.

Kate Bedingfield just said something so ridiculous that Chris Wallace was shocked. Trump has been “inciting violence all summer.” Do these people really believe this crap? pic.twitter.com/BV5OAwXlQP

Bedingfield then alleged that the president has urged members of his base to behave in violent manners; of course, this is simply not accurate and there’s nothing ever showing Trump urging supporters to behave violently. If anything, the president has remained consistently critical of violent rioters.

Are Americans Buying What the Biden Campaign is Selling?

While the Biden campaign seeks to paint President Trump as the hidden force behind violence in America, the nation doesn’t seem to be buying it. As of early Monday morning, #BidenRiots began trending on social media. Likewise, Bedingfield is currently taking heat for her claims that the president has egged on violence this summer.

Another element of the rioting, looting, vandalism, etc. is that these acts are not happening in cities run by Republicans or conservatives.

Each and every city experiencing crimes of the aforementioned nature are run by Democrats; worse yet, Democrat mayors have almost unanimously refused help from the federal government to bring an end to violence in their communities.

What do you think about the claims from Joe Biden’s deputy campaign manager? Do you believe President Trump has egged on violence throughout this summer? Let us know your opinions in the comments section below!