Since the inception of Joe Biden’s 2020 presidential campaign, he’s struggled in his interactions with minority voters.

Awhile back, the Democrat nominee stirred up controversy when he stated that African-Americans “ain’t black” if they’re hesitant about backing him over President Trump. Earlier this month, the nation also cringed when Biden played Despacito at an event meant for outreach to the Hispanic community. 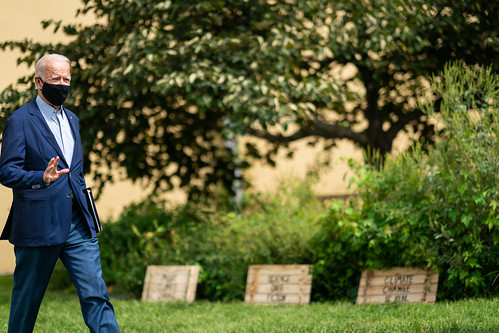 “Remarks on the Climate Crisis – Wilmingt” (CC BY-NC-SA 2.0) by Biden For President

Needless to say, the former vice president has faced numerous accusations of patronizing and pandering for votes. Now, even certain figures on the left are beginning to slam Biden’s interactions with minority communities, confirms Breitbart News.

A Closer Look at the Latest Biden Criticisms

The latest backlash against Biden comes from leftist film producer Michael Moore. On Sunday, Moore sat down for remarks with MSNBC and stated that Americans in Michigan are having a tough time with the Biden campaign.

According to Moore, Michiganders regularly call him and claim that they’re unable to get ahold of Biden signs for their yards. The film producer also stated that the former vice president’s campaign is lacking “on the ground” staffers in Michigan.

🚨 Michael Moore sounds the alarm on Joe Biden’s total lack of a campaign in Michigan:

"There are no real Biden people on the ground… Biden has only come to Michigan once… Why are you ignoring the Black community?” pic.twitter.com/uR4XlMiuUR

Finally, Moore panned Biden for risking the loss of Michigan to Trump. The filmmaker then noted that on the few occasions that the former vice president has visited Michigan, he “went to two white towns.”

After remarking that Hillary Clinton narrowly lost Michigan in 2016, Moore questioned why Biden is “ignoring” members of the black community in Michigan.

Taking the Minority Vote for Granted

Like other Democrats who seek election, Biden has regularly faced accusations of taking black and other minority voters for granted. Critics warn that the former vice president shouldn’t assume that he has the African-American vote in the bag.

At this time, Biden’s campaign has yet to respond to the commentary from Michael Moore. Moore, as a staunch leftist, repeatedly cautions that Democrats are in danger of being “outsmarted” by President Trump yet again this election cycle.

We’re 44 days away from election day, and we have to organize and mobilize folks like never before.

Sign up to join our weekend of action and get started today: https://t.co/zgZYgZGmbD pic.twitter.com/mdifx3OvRk

The liberal film producer is furthermore aware that the enthusiasm for President Trump’s campaign outweighs excitement for Biden’s campaign. At this time, the Democrat nominee has focused more on attacking President Trump in ads rather than winning over Americans’ support via policy.

Do you believe that Joe Biden is ignoring the black community in Michigan? What do you think about the various ways that Biden has interacted with minority voters during this election cycle? Let us know in the comments section below!