Democrats remain terrified of President Trump being able to directly speak with his supporters.

This is why they fought tooth-and-nail last week to stop his Tulsa rally from happening. The left condemned the president for hosting a large gathering, claiming that such a gathering increases the risk of COVID-19 transmission. However, leftists had a very different attitude regarding gatherings for George Floyd and defunding the police. 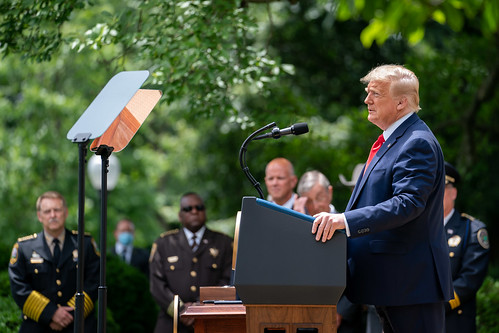 Atlanta Mayor Keisha Lance Bottoms (D) is one of the latest left-wingers to go after Trump, reports sources. Bottoms professed on Sunday that President Trump’s rally was an “embarrassment” to the nation.

Like many other Democrats, the Atlanta mayor has a vested interest in Trump not winning a second term in office. As a matter of fact, rumor has it that Bottoms is on the list of potential vice presidential picks for Joe Biden.

The Atlanta mayor’s criticism of the president arrived yesterday during an interview with CNN. Not only did Bottoms brand Trump’s successful Tulsa rally as an “embarrassment,” but she also coined the president as a “danger” to America.

Atlanta Mayor @KeishaBottoms on President Trump’s Tulsa rally: “That rally was an embarrassment… He did not recognize any of the racial tensions that are happening across our country… He continues to try and divide us and really inflames the worst in people” #CNNSOTU pic.twitter.com/4c2mkmNbAj

Mayor Bottoms didn’t stop there, however. She repeated the typical leftist talking points which assert that Trump “inflames” racial disharmony and fails to bridge certain gaps.

All of this is rich coming from a mayor whose city is literally burning to the ground due to failed leadership. Atlanta police officers are calling out and walking off the job left and right; buildings and restaurants in Atlanta are burning down, yet all Bottoms can think about is her loathing for the president.

“This is no time to joke… Do you think the people, the 120,000 families out there who are missing their loved ones thought it was funny?” Atlanta Mayor @KeishaBottoms reacts to the claim that Pres. Trump joked about ordering administration to slow down coronavirus testing pic.twitter.com/z9iTRXksm4

How sad is that?

What did you think about the Atlanta mayor’s attacks against President Trump? Should Mayor Bottoms be more focused on the president or the crime and absence of police presence in Atlanta? Let us know in the comments section below!