There is a growing segment of the American population that has tired of being told to wear face masks.

The issue of whether or not to wear a mask has become at least as controversial as lockdowns, if not more so. Like it or not, many people have issues with being ordered to cover their faces. Furthermore, government mandates that “require” individuals to wear face masks aren’t easing people’s concerns. 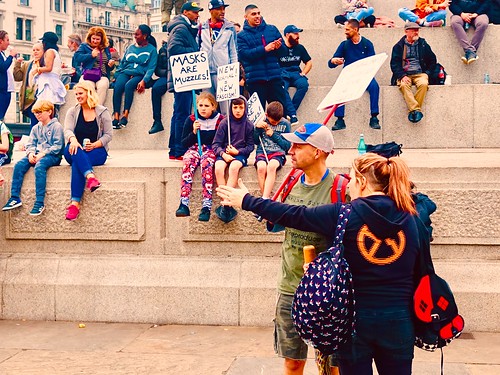 Earlier this week, an anti-mask protest broke out in Florida when various individuals walked through a Target and called upon others to rid themselves of masks, confirms Breitbart News.

What to Know About the Anti-Mask Protest in Florida

On Tuesday, Florida demonstrators marched inside a Target, verbally noting their exasperation with face coverings. The group also chanted to the song “We’re Not Gonna Take It” while urging shoppers in Target to breathe freely without masks.

During the anti-mask protest, a few of the shoppers appeared inspired by the demonstrators and subsequently removed their masks. When speaking with members of the press, the anti-mask demonstrators clearly articulated their issues with mask mandates.

What do you think about this?? Comment⬇️⬇️⬇️ pic.twitter.com/o1qp3ZK2S1

One man stated that he supports others who feel the need to wear a mask, yet doesn’t feel that he should be forced into wearing one.

Another woman at the anti-mask demonstration explained that her grandfather served in World War II and didn’t fight for her to have to live under the “communism” that is mandatory face covering edicts.

Reactions to the Anti-Mask Demonstration

Individuals in favor of mask mandates haven’t hesitated to blast the anti-mask protesters from earlier this week. A common talking point from this side asserts that anyone who doesn’t want the government to force them into a mask is “selfish” and “stupid.”

However, other Americans are listening to the points made by the Floridians who demonstrated against compulsory face coverings. Many have stated that the government should not have the power to compel individuals to cover their faces.

"Take off your mask and breathe. It's all a lie!" chanted a group of brave Americans as they walked the aisles of Target in Florida. Each and every one of them deserves a big and warm hug for their bravery and activism. We need more of them in every community. #COVIDFalseFlag pic.twitter.com/J0IzSjOve9

Furthermore, certain debates have come up regarding the science behind face coverings, along with the health risks of consistently wearing them.

What did you think about the anti-mask demonstration in Florida this week? Would you like to see more Americans stand up against face mask mandates? Let us know down below in the comments section.