On Thursday, criminal justice reform advocate Alice Johnson spoke to the nation during the Republican National Convention. Johnson, who was previously set to serve a life sentence for a non-violent drug crime, received clemency from President Trump in 2018. 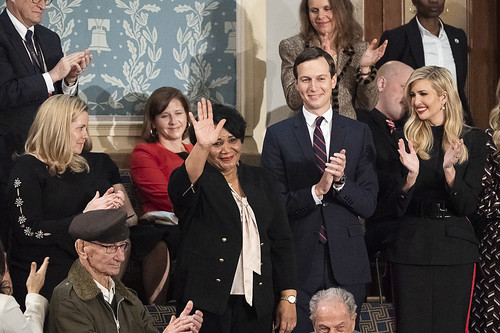 “2019 State of the Union” (Public Domain) by The White House

Conservatives immediately rushed to Johnson’s defense, citing the notion of Johnson being a “prop” as racist. Johnson herself also spoke out, stating that she is not a “prop” or puppet, but instead makes her own choices.

On Friday, Alice Johnson also received a complete pardon, following the clemency from two years ago, according to Breitbart News.

Everything to Know About the Full Pardon of Alice Johnson

Yesterday, President Trump announced from the Oval Office his decision to fully pardon Johnson. The president praised Johnson for her criminal justice reform advocacy and stated that he was moved by seeing her in the crowd of GOP National Convention attendees on Thursday night.

The full pardon of Johnson opens her up to do many things that would otherwise be unavailable to her. President Trump himself noted this when stating that the criminal justice reform advocate can do “whatever [she] [wants] in life.”

President Trump and Alice Johnson pray together after he grants her a full pardon.

A moving moment in the Oval. 🙏 pic.twitter.com/rGhhfjVS33

The president then encouraged Johnson to continue her work on criminal justice reform and pushing for the release of nonviolent offenders facing steep jail sentences.

Alice Johnson and her story have brought an immense spotlight to criminal justice reform. Months after the president granted clemency to Johnson, he also signed the First Step Act into law.

As criminal justice reform gets more attention, so do the differences between President Trump and Joe Biden. As a matter of fact, Biden is responsible for the legislation that sent Johnson to prison; the crime bill is something that the former vice president not only helped write, but also co-sponsored and lauded.

As people question her "Blackness" for being conservative, Alice Johnson responds:

"We are exercising our choice and our right and our freedom to use our minds—I'm not a prop and I'm not a puppet. I make my own choices as to what I'd like to do." #RNC2020 pic.twitter.com/9NnWY34wzV

Since Johnson’s speech at the GOP National Convention and since her full pardon from President Trump yesterday, Biden has remained silent about his unflattering record on criminal justice reform in America.

Are you glad that President Trump fully pardoned Alice Johnson on Friday? Do you think Americans will be seeing more of her in the future? Be sure to let us know in the comments section down below!